What is Non-Hodgkin Lymphoma?

Non-Hodgkin lymphoma (NHL) is one of the most common cancers in the United States. It accounts for about 4 percent of all cancer cases. More than 95 percent of cases occur in adults but certain types are common among children. NHL is the name of a group of blood cancers that develop in the white blood cells (leukocytes[G1] ). There are about 60 different subtypes of NHL. Most subtypes fall within two main groups, named for the cell where the lymphoma starts: B-cell lymphomas or T-cell lymphomas. NHL can be either indolent (slow growing) or aggressive (fast growing). Most NHL start in B-cells.

Risk factors are things that can increase the chance of developing a disease. Certain cancer risk factors, such as smoking, can be changed.

Other cancer risk factors, such as a person’s age or family history, cannot be changed. Having one or even many risk factors does not mean that a person will definitely get the disease. Many people who are diagnosed with non-Hodgkin lymphoma have few if any risk factors.

These are risk factors for non-Hodgkin lymphoma (NHL):

Although NHL can be diagnosed at any age, people are often diagnosed when they are 60 or older.

NHL occurs more often in men than women. But there are certain types of NHL that are more common in women. Reasons for this are not known.

In the United States, whites are more likely to develop NHL than African Americans or Asian Americans/Pacific Islanders.

Exposure to atomic bombs and nuclear reactor accidents can increase your risk of developing a number of cancers, including NHL, leukemia, and thyroid cancers. People treated with radiation therapy for certain cancers also have a slightly higher risk of developing NHL.

Exposure to chemicals such as benzene, certain herbicides (weed killers) and insecticides (insect killers) may be linked to an increased risk of NHL. Chemotherapy drugs used to treat other cancers may also increase the risk of developing NHL. It is not clear whether the link between chemotherapy drugs and NHL is related to the original cancer itself or is a side effect of treatment.

People who have a suppressed immune system are at increased risk for NHL. This includes those with the human immunodeficiency virus (HIV). It also includes anyone who takes immune suppression treatment for conditions like rheumatoid arthritis or lupus. People who have received solid organ transplants are also at increased risk of NHL, because they must take long-term immune suppression drugs to keep the transplanted organ healthy.

Doctors diagnose lymphomas based on 3 factors: (1) how they look under a microscope, (2) genetic changes in lymphoma cells, and (3) the presence of certain markers on the surface of the cells.

To diagnose NHL, your doctor will order several tests, including a physical exam, blood tests, biopsies, and imaging tests. These tests will confirm the exact type and stage of your disease. This will help the doctor decide the best treatment options for you.

Two kinds of biopsies are used to diagnose NHL:

If a biopsy confirms an NHL diagnosis, your doctor may recommend additional tests to find out how far the disease has spread. These other tests could include a chest x-ray, CT scan, MRI, PET scan, or blood tests. NHL can be difficult to diagnose and may require multiple tests.

Treatment and Side Effects Management

Your doctor will recommend treatment options based on the stage of your NHL, your overall health and your treatment preferences. Your treatment plan should be designed specifically for your cancer.

If your disease is diagnosed early, is indolent (slow growing), and you have no symptoms, your doctor may recommend a watchful waiting approach (sometimes called “active surveillance”). This means your doctor may not recommend any treatment when you are diagnosed. Instead you will be watched closely for any signs that treatment is needed.

If you need immediate treatment, talk with your doctors about developing a treatment plan that covers managing your cancer in the short term and long term. It is okay to seek a second opinion to discuss your diagnosis or treatment options.

Ask your doctors questions if you do not understand something about treatment or the medical terms they are using. Write down questions before your visits, and take notes when your doctor talks so you can remember what was said. You may want to bring a friend or family member to take notes for you.

Questions to Ask Your Doctor:

Treatment Options and Side Effects Management for NHL

Immunotherapy is one of the most exciting areas of new discoveries and treatments for different kinds of cancer. Understanding how the immune system works is opening the doors to developing new treatments that are changing the way we think about and treat cancer. On this episode, guest host Linda House is joined by Dr. Gerald Messerschmidt to talk about immunotherapy and its new advancements in recent years. Elizabeth Franklin also joins the program to discuss barriers and access to quality care for patients with cancer.

CAR-T cell therapy is a revolutionary treatment approach that is bringing new hope to multiple myeloma patients. Results of an early phase study were described by Reuters as “unheard of” and an industry paper called them “jaw-dropping.” On the show to help us find out all about this exciting new approach are Cherie Rineker who has been living with multiple myeloma for over five years and is participating in a clinical trial exploring this new treatment, and Dr. Jesus Berdeja, lead investigator of that study. 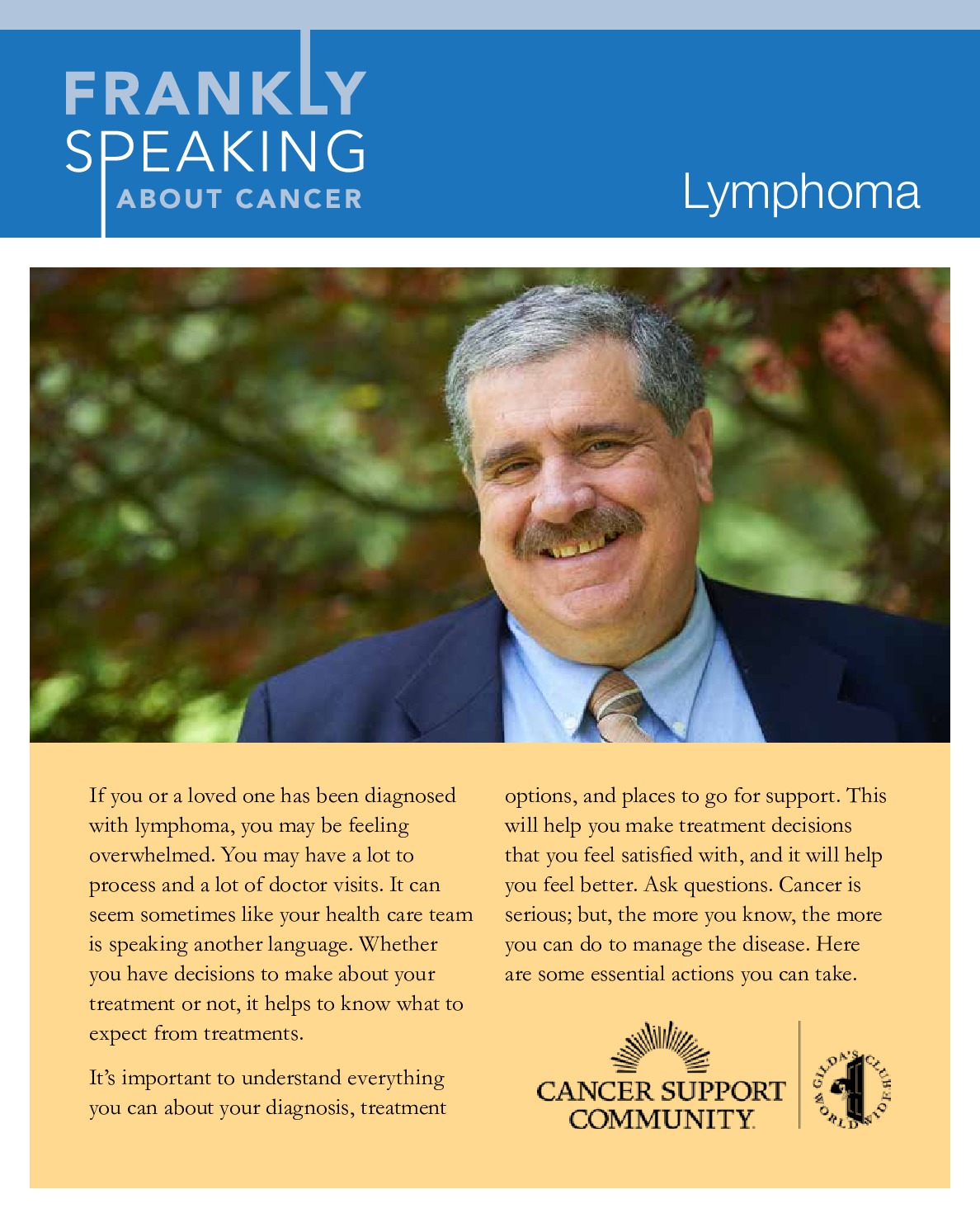 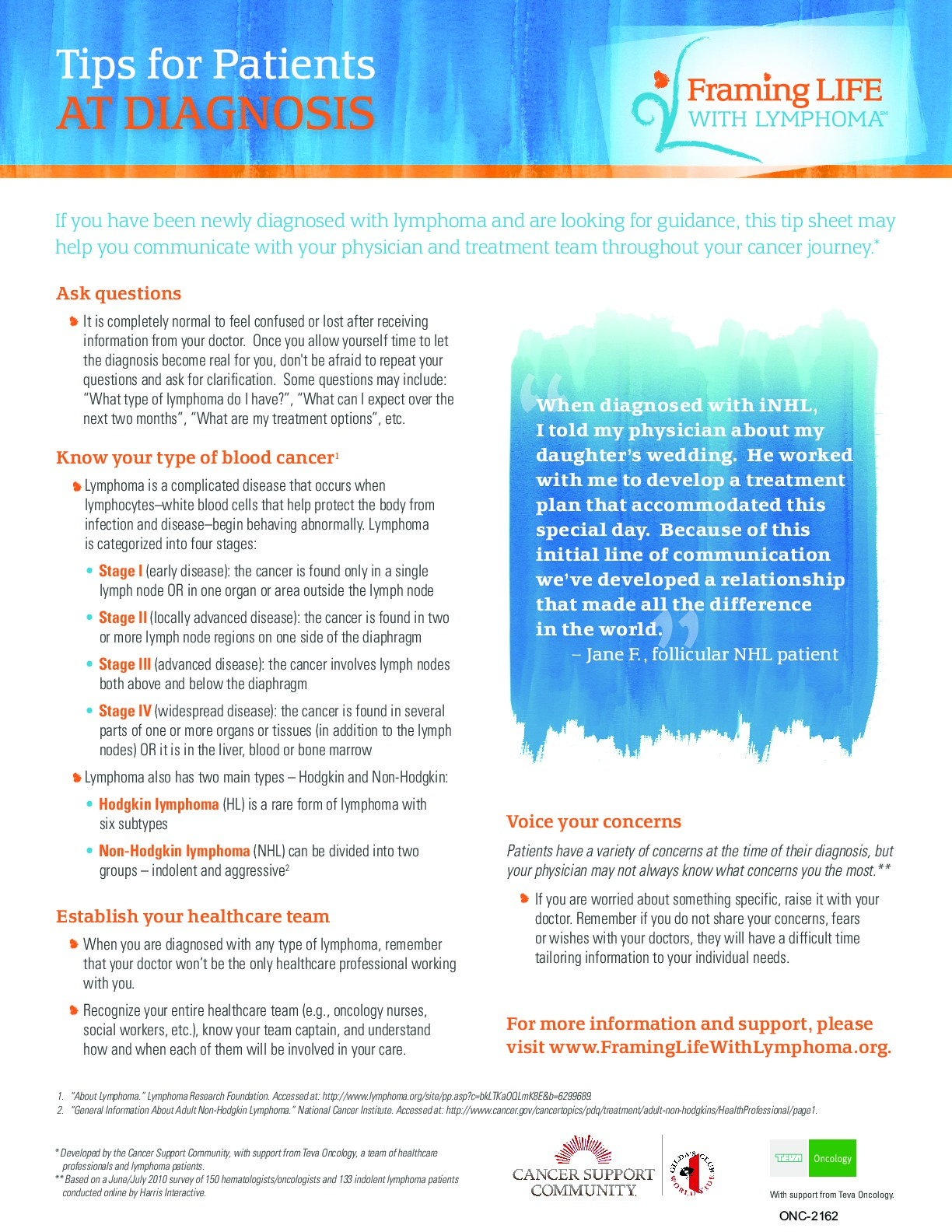 Tips for Patients at Diagnosis (Lymphoma) 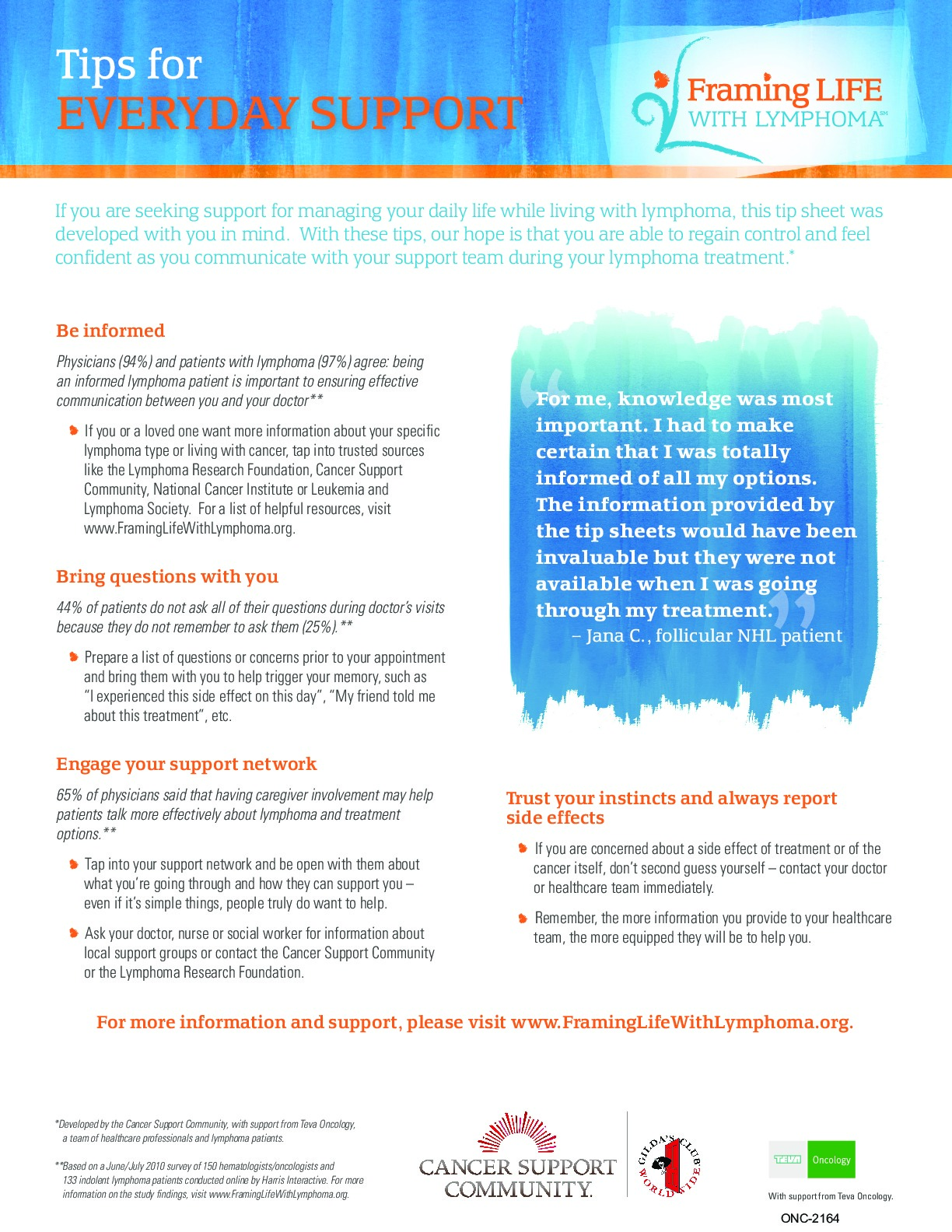 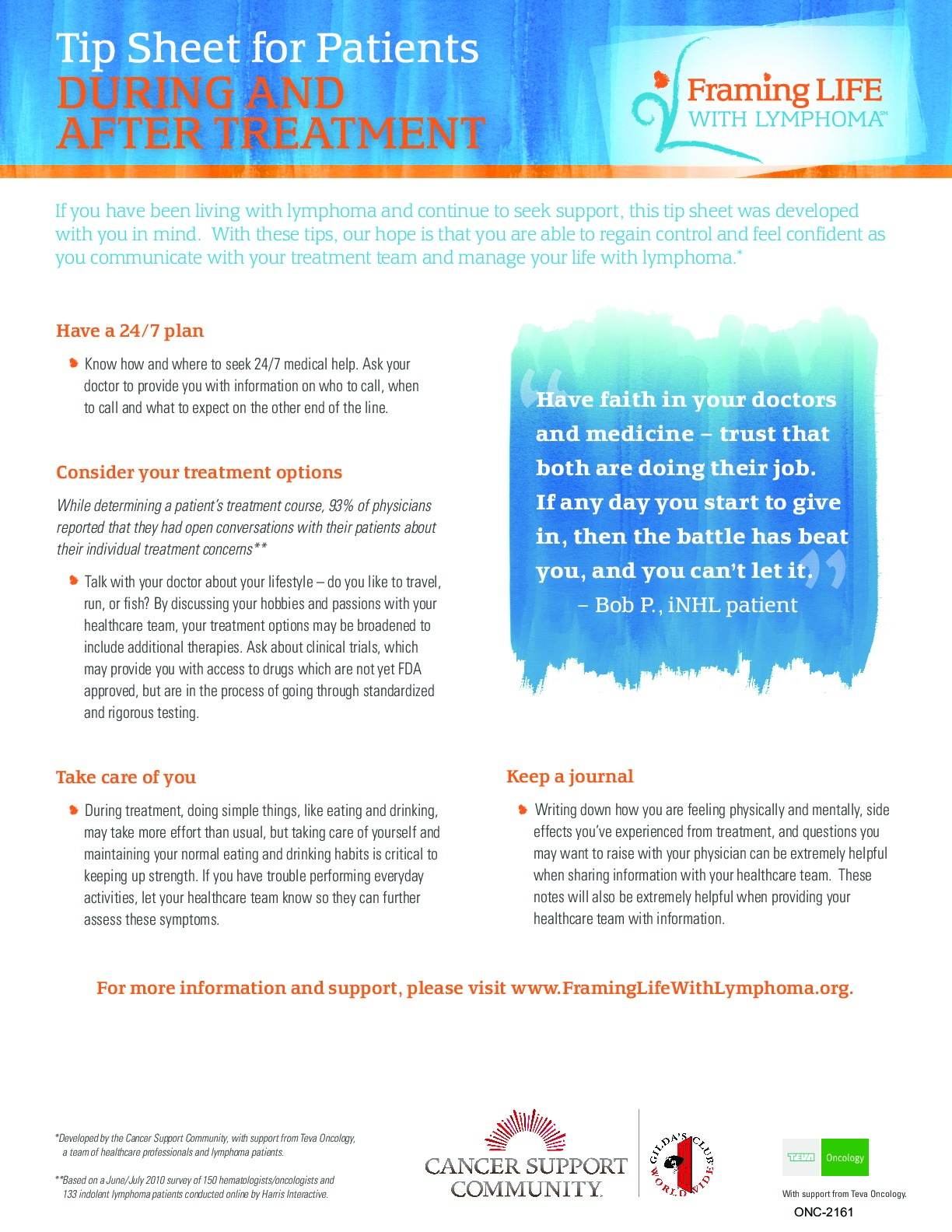 Lymphoma - Tips for Patients During and After Treatment 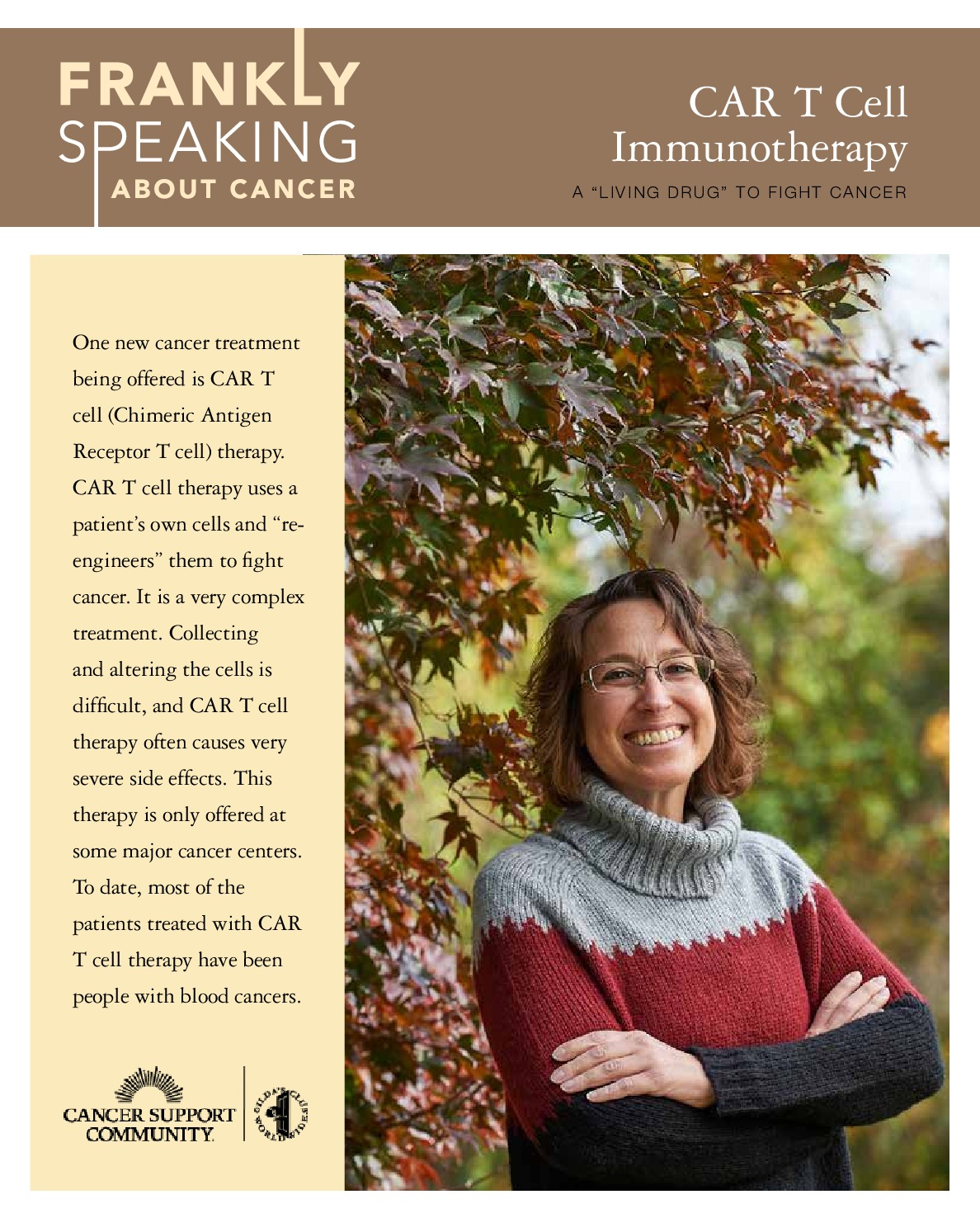