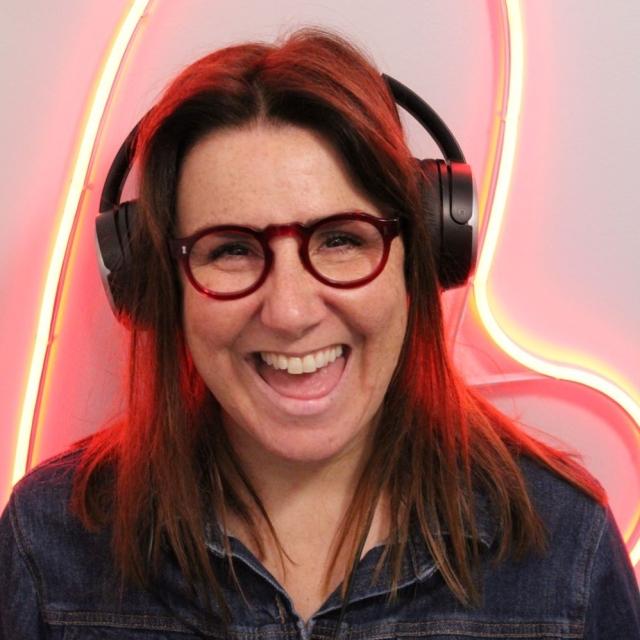 "Laughter and the funny are a huge part of my life," says Katie Phillips, whose podcast "Talking With Cancer" includes cheerful doses of both as she shares her experiences with thyroid cancer.

In February, Katie Phillips learned she had a rare type of thyroid cancer. Newly married and planning to start a family, she very suddenly found herself navigating the challenges of a cancer that doctors understood little about. Medical appointments and treatment discussions with her healthcare team became part of her new normal.

Katie, a lifelong resident of London, England, began keeping an audio diary about her experiences, with the help of her friend Clair Whitefield. The recordings are now available as a podcast, “Talking With Cancer,” that is in its second season.

In the following Q&A, Katie shares more about her diagnosis, her podcast, and why laughter can sometimes be the best medicine.

Prior to your cancer diagnosis, you hadn’t experienced any health issues. But over a relatively short period of time, you developed a few troubling symptoms. Could you talk a bit about those symptoms and when you sensed things were not right?

I developed a cough, but it coincided with some renovations we were doing at home. I was convinced that the cough was a result of the buildup of dust, plaster, and paint in the house, over a 2- to 3-month period. But the cough never changed over time. And it was very persistent. Whenever I lay down, or moved at night or laughed a lot, or sometimes when I ate, the cough would come on. And I could sometimes hear a crackling sound in my throat area. I was told by a family member who’s a doctor that the cough would go eventually. I was given an inhaler. I took throat lozenges. But nothing made a difference. I also noticed that I was more susceptible to choking on food and that seemed a bit strange to me.

A few months into having the cough, I discovered a lump at the back left side of my neck. Again, I was told this was nothing to worry about. But in a 5-week period, it grew, and that’s the point at which I sought the advice of a consultant, which was in February 2022.

Your doctors explained that the type of thyroid cancer you have is both “rare” and “complicated.” Those initial days after your diagnosis must have been very difficult. Where were you able to turn for support, and what were some things that helped you cope?

After I’d had a load of tests, I went to see an ENT [ear, nose, and throat] consultant. I was on my own because my husband was abroad for business. The consultant was very sensitive; he told me this was cancer, but because they couldn’t determine the exact diagnosis, he knew I’d have to see him again. He suggested I come back with someone who would be able to take notes at the next appointment. It all sounded very serious.

After that initial appointment, I was very lucky to have my best friend come and meet me straight away. We walked and talked and went for dinner. I was still in shock. My husband flew home the next morning and he was and continues to be the most incredible support. I am a very vocal person, hence the podcast, so I was able to talk to a few people close to me. And I already had a therapist whom I continue to see weekly.

Despite all the people around me, I mainly wanted to speak to my husband, my best friend, and my close family, as I found talking to a lot of people quite stressful. My mum lives outside of London in South West England, in a beautiful location called the New Forest. I was fortunate enough to spend some time there and be outside with nature. Having my dog helped me too, as it meant I had a responsibility. I had to get up and go out even if I didn’t always feel like it.

The shock, the despair, and the sadness at that time is extremely hard to manage and accept. It takes time to come to terms with. So for me, going for walks in nature was a really important part of my dealing with the diagnosis.

"Despite all the people around me, I mainly wanted to speak to my husband, my best friend, and my close family, as I found talking to a lot of people quite stressful."

Could you briefly explain the type of thyroid cancer you have and how your healthcare team is helping you navigate both its rarity and complexity?

I have a type of papillary thyroid cancer known as Hobnail. As well as appearing around the thyroid itself, I had many cancerous lymph nodes in the neck (around 85). The cancer is also around my windpipe, chest area, and lungs. The medical team did a biopsy in those early days and, from that tissue, they determined that I have the ROS1 gene, which has caused the cancer.

There’s a new direction in the way cancer is being looked at and treated, which is more focused on the origin of the cells that cause the cancer rather than which organ it appears in. So, I take a targeted therapy called entrectinib, which cuts off the ROS1 gene and in turn shrinks the cancer. The drug only works for a certain amount of time before the gene turns back on again. At that point, I will be put on a different drug.

After 4 months on the targeted therapy, I had surgery to remove the cancer around the neck area — they took out 100 lymph nodes during an 8-hour operation. I was also given radioactive iodine 3 weeks after surgery, but in my case it was not effective. I was taken off the targeted therapy before, during, and after the operation. So in effect, I had a 6-week break from it. I am now back on it and will be checked regularly to see how it’s affecting my bloods and heart, as well as have scans every 2 months to understand the impact it’s having on shrinking the cancer. I may have surgery again, and I may also do the radioactive iodine again, but next time whilst still on the entrectinib. My treatment is ongoing. I may also have radiotherapy at some point.

"There’s a new direction in the way cancer is being looked at and treated, which is more focused on the origin of the cells that cause the cancer rather than which organ it appears in."

A few weeks after your diagnosis, you started an audio diary about your cancer journey — a weekly zoom conversation with your longtime friend Clair Whitefield. What inspired you to start an audio diary?

Because I have a large network of friends and colleagues and family, I had a lot of people to update. And I thought, rather than send them each individual messages, I could send them a link to the zoom audio. That way they’d all be up to date with how I was doing and what was happening medically with me. Clair and I just did them weekly and the email group grew to be 80 people. A few months in I thought the easiest thing to do would be to put these out as a podcast. Because I work in the media and entertainment industry, that wasn’t too hard for me to do. I also wanted to keep a record for myself. And I've found the chats to be really cathartic and a good way to move on from week to week with a clean break.

Those recorded conversations soon became your podcast series “Talking With Cancer.” By talking openly about your experiences, how do you hope it might help your listeners?

I hope that other people affected by cancer in some way will get something out of the podcast. That may be a tip on how to navigate their medical team, or what to expect from tests or procedures; it might be how to talk to someone with cancer, what to say or what not to say, how to show you care. It could also be a positive way to handle something so very difficult, like the ability to be present or find meaning in the experience in some way. Some medical professionals have reached out to me to say the podcast has helped them better understand their patients. I wasn’t expecting that, but I was so happy to learn that I can also help the industry side as well.

Your podcast includes cheerful doses of laughter, which can be a welcome balm amid the intensity of a cancer diagnosis. In your first podcast episode, you told Clair, “You’ve got to laugh.” What role has humor played in your own life as you’ve navigated your diagnosis?

I have always worked in the comedy industry, so laughter and the funny are a huge part of my life. I also grew up in a funny household and we always made jokes and laughed a lot. My husband and I share a sense of humor too. So laughter is something I know really well. And with that it enables me to talk about taboos and stigmas in a way that makes them accessible and relatable. It also allows other people to get on a level where they feel comfortable talking about cancer and difficult subjects around chronic illness. In series one I always threw a mum joke in there, cos my mum just came out with some really funny things. I thought even if people don’t know her, they’ll get a good sense of who she is, and she’s funny, sometimes without meaning to be. We all know someone like that, don’t we?

“I hope that people affected by cancer in some way will get something out of the podcast. That may be a tip on how to navigate their medical team... It could also be a positive way to handle something so very difficult, like the ability to be present or find meaning in the experience."

Learn more about Katie’s story and her podcast.

Find information about risk factors, diagnosis and staging, and treatment.

We offer free navigation for cancer patients or their loved ones by phone and online.