HIV and Cancer: One Man Shares His Experience Navigating Both Diagnoses 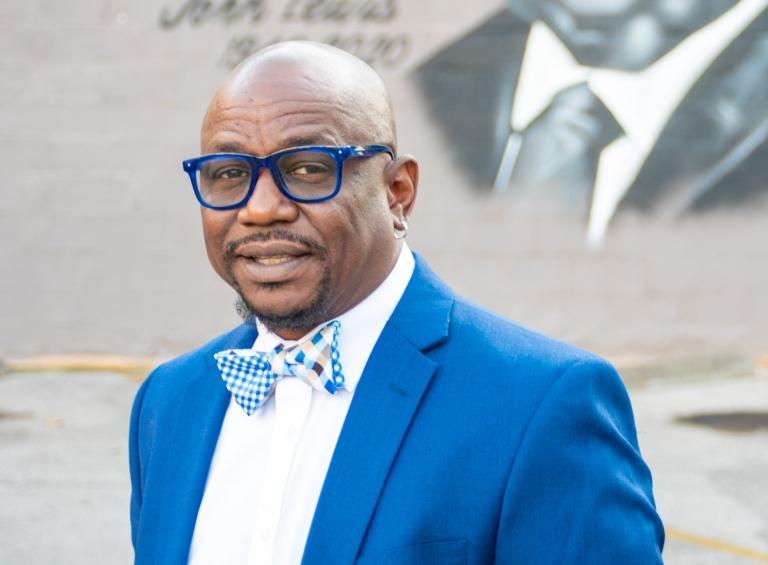 Tony shares his expertise in many ways, including serving as a community-level HIV mentor.

As a cancer survivor living with HIV, longtime community advocate and activist Tony Christon-Walker shares his experience and expertise in many capacities. He has served as a community-level HIV mentor for more than a decade. He is also a member of our HIV & Cancer Advisory Board for Frankly Speaking About Cancer educational materials. A published author, Tony’s advice and guidance are frequently sought out on topics such as the intersectionality between HIV and racial disparities and engaging marginalized communities of color.

To help mark HIV/AIDS Awareness Month, we share insights from Tony about his experience navigating cancer and HIV, the importance of self-advocacy as a patient, and facing — and defeating — stigma.

Tell us a bit about your experience living with HIV and facing a cancer diagnosis.

Honestly, I’m grateful for my HIV diagnosis. I know it sounds crazy, but cisgender men engage with medicine in a different way than women. Men don’t see their doctors on a regular basis. As a Black man, my interactions are often sprinkled with medical racism. Having HIV means that I must see a physician at least twice a year to ensure my meds are working. This fact made it easier for me to talk to my doctor about issues that I experienced. Even that wasn’t enough to ensure I got the care I needed and deserved.

In late 2013, I started experiencing pain when I would have a bowel movement. I informed my doctors that I thought I was suffering from internal hemorrhoids, and they told me that I should start to increase my fiber intake. That was in December. After a month I went back, and they told me it would take some time before it gets better. They also prescribed a steroid cream for me to use. After 2 months of using it, the pain had only gotten worse.

I went through this for another 4 months until, one day, I was advocating for a patient of mine and realized that I hadn’t been doing a good job of advocating for myself. I talked to a nurse practitioner about my pain and she made me an appointment for the next day. It was at that point that I realized my doctors had been treating me for internal hemorrhoids for 9 months and had never laid a hand on me.

It took a few more weeks for me to get my official diagnosis because I was in the very early stages. My first results indicated that I had an anal fissure. They decided to go in and fix it and stop. They told me it was probably cancer. The first scan results were inconclusive. Then, I had another; it was also inconclusive and caused me to have an abscess. They lanced it and then tried another scan — same results. Next, there was [a] deep-tissue biopsy — also inconclusive. Finally, they did an MRI with a sugary indicator that collected around the tumor and gave me my diagnosis of rectal cancer.

I was scared to death of having to have a permanent colostomy, but it was the best course of treatment. The first years were hard. I had to get used to having this hole in my stomach and training my body to adjust to my new reality. I remember talking to other people about their outcomes and never thought I could live a normal life again. Being a gay man, it was hard for me to come to grips with having my rectal area permanently closed. I sought therapy. I’m glad to say that, although I will never be at 100%, I’ll take the 95% that I now have.

What are some of the emotional challenges that you have experienced because of the intersection of your diagnoses?

My biggest emotional challenge was dealing with a poor body image. I had to come to the realization that even without the full use of my body I was still a person deserving and worthy of love. Even though I was married at the time, I still felt bad about my body and the parts I’d lost.

Have there been any clinical challenges that have come up because of your HIV status and cancer diagnosis?

There was a period of time during my treatment and surgery when I was not able to take my meds because of the toxicity of the chemotherapy interacting with my HIV regimen. Then I had 2 major surgeries back-to-back because, after the first one, they discovered I was bleeding internally. I was in a medically induced coma for about 3 to 4 days.

"Try to be strong if you can. Maintain a good support system, and most importantly, know that people can only do to you what you allow them to do."

What strategies have you developed to navigate those challenges?

I realize that I walk in a particular set of privileges that many people like me don’t. I have always maintained a good job with benefits. The problem was the medical facility I chose for treatment did not accept my insurance. Even though my husband and I had been together for 5 years, same-sex marriage was not legal in my state. If it had been, I could have just used my husband’s insurance. This was in 2014, before same-sex marriage became the law of the land. My husband works for a major insurance carrier, and he discovered that even though our union wasn’t legal in our state, I could use his insurance immediately if we got legally married in another state. So, we drove to D.C., got married, and I was able to get the care I needed on my terms.

Stigma occurs when a group has negative or unfair beliefs about something. Stigma, or perceived stigma, can be very isolating. Have you experienced any stigma?

I have experienced stigma, but once I became publicly disclosed about my HIV status, the stigma seemed to go away. I have very supportive family and friends, another privilege for which I’m grateful.

What advice do you have for people facing stigma because of their diagnoses?

Try to be strong if you can. Maintain a good support system, and most importantly, know that people can only do to you what you allow them to do. A lot of the stigma we experience is self-imposed. If you can forgive yourself for whatever you think you did to have either diagnosis, you can defeat stigma.

Watch Our Video: What You Need to Know About HIV & Cancer

Meet others like you on our discussion boards for people impacted by cancer.