What is Squamous Cell Carcinoma?

Squamous cell carcinoma (SCC) is the second most common type of skin cancer behind basal cell carcinoma. As its name suggests, it develops in the flat squamous cells that make up the outer layer of the skin (called the epidermis). Until recently, SCC was more often seen in older people, mainly men who worked outdoors. But today, more women and younger people are developing SCC, according to the College of American Pathologists.

Most squamous cell skin cancers appear on sun-exposed areas of the body – the face, neck, ears, back of the hands and scalp. But they can occur in other areas too. For example, SCCs can develop in the mouth or on the genitals. In most cases, SCCs are cured by either removing the cancerous growth and/or using medications applied to the skin. But, if it spreads, it can cause damage and scarring and may even invade nearby tissue or organs.

What Can I Do to Protect Myself?

Fortunately, most SCCs are found early and can be cured. Here are some steps you can take to help protect yourself:

What Does SCC Look Like?
A change on the skin is the most common sign of skin cancer, including SCC. That’s why it is important to get to know your skin. If you notice a new growth, a sore that isn’t healing or a change in an existing mole or other area of the skin, get it checked out.

If your cancer spreads to the bone, learn more

Cancer occurs when cells in your body start growing and dividing faster than they are supposed to. At first, these cells may form into small clumps or tumors. But they can also spread to other parts of the body. If this occurs, you will be told you have “metastases,” “metastatic cancer,” or “stage 4 (IV)” cancer. The word “advanced” is also used to describe these cancers.

In this episode of our special series Spotlight on Skin Cancer, we take a look at 2 forms of advanced skin cancer: advanced basal and squamous cell skin cancers.

Treatment will depend on the size, location and how deep the tumor is in the skin, as well as if it has spread elsewhere.

There are several different types of surgical procedures that can be used:

SCC can invade nearby tissue. If this happens, several surgeries may be needed to try to remove all of the cancer cells. These procedures can be disfiguring and very upsetting. If nearby lymph nodes are involved, a lymph node dissection may also be required.

If SCC is “superficial” (also called squamous cell carcinoma in-situ, in other words, not very deep in the skin), creams containing chemotherapy medications (imiquimod, 5-Fluorouracil) can be applied to the skin.

Radiation therapy uses high-energy x-rays to target and kill cancer cells. The use of radiation may be considered for patients who have:

For SCC that has spread (metastasized), systemic therapy can be considered which includes chemotherapy, targeted therapy, immunotherapy, and clinical trials. For organ transplant patients who have many SCCs, transplant physicians can consider adjusting the immunosuppressive treatment if appropriate.

Immunotherapy pushes the body’s immune system to work harder to fight the cancer. Immunotherapy has been approved to treat patients with certain types of squamous cell carcinoma who are not candidates for surgery or radiation therapy. 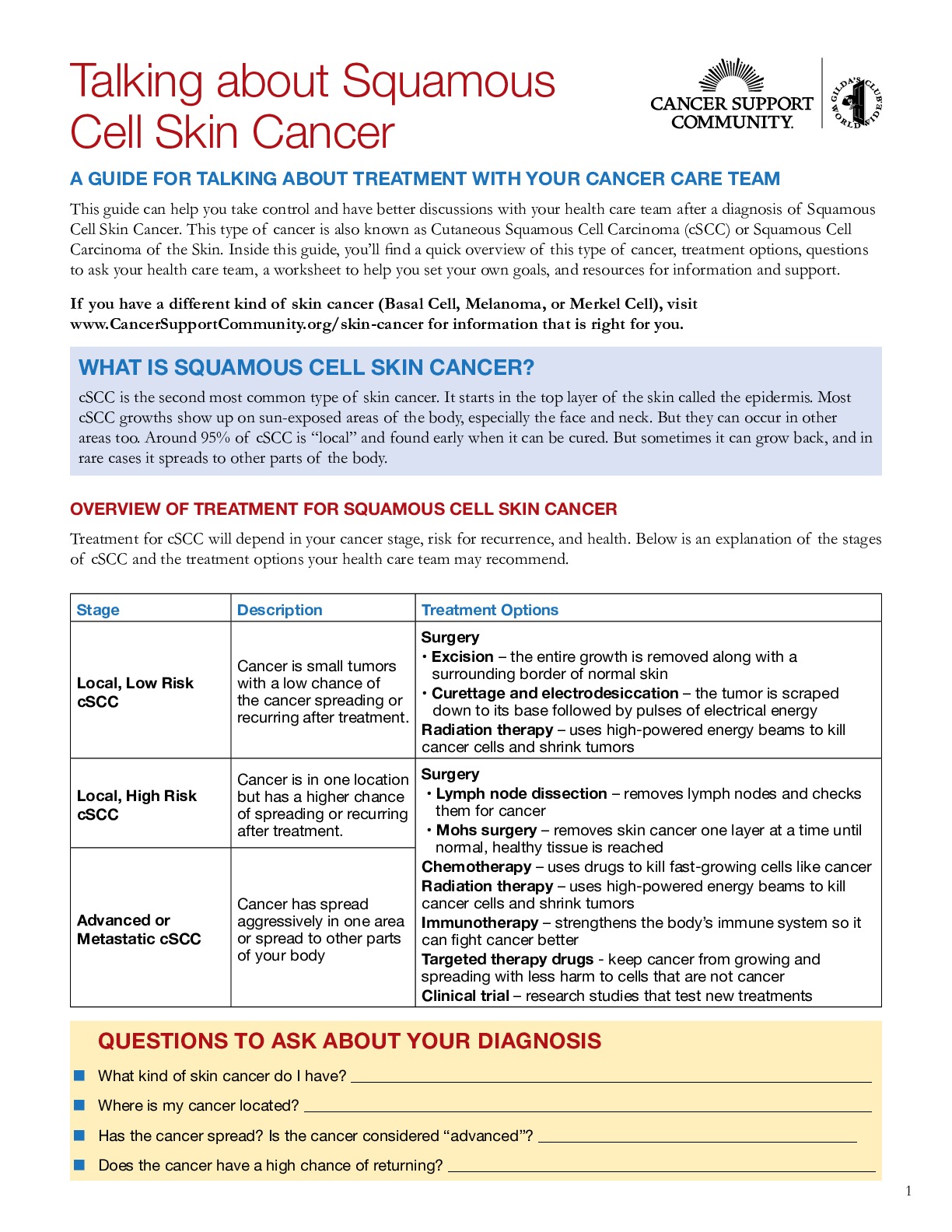