Merkel cell carcinoma (MCC) is a rare type of skin cancer. It is sometimes called neuroendocrine carcinoma of the skin or trabecular cancer. MCC forms when the body’s Merkel cells grow out of control. These cells can be found in the top layer of the skin and are close to the nerve endings.

MCC usually develops in areas where the skin is exposed to the sun. These areas include the head, neck, arms, and legs. This cancer can grow quickly and metastasize (spread) to other parts of the body. MCC often spreads first to nearby lymph nodes. It may then spread to lymph nodes or the skin in other areas. It may even spread to the lungs, brain, bone, or other organs. 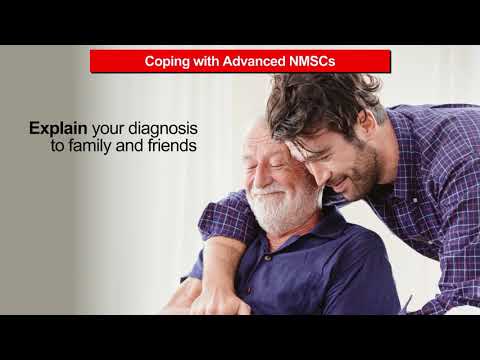 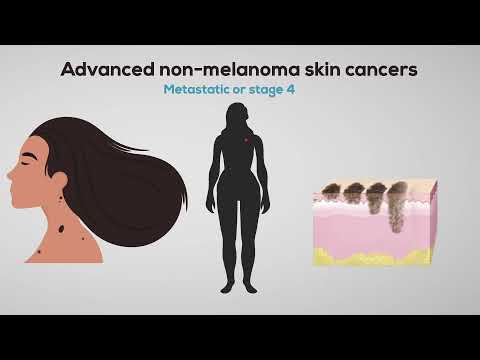 What is Non-Melanoma Skin Cancer?

Ruby, your virtual community navigator, will help explain what you need to know about advanced Non-Melanoma Skin Cancer.

Anything that increases a person’s risk of getting a disease is called a risk factor. Having one or even many risk factors does not mean that a person will get the disease. Risk factors for Merkel cell carcinoma include the following:

A sign of MCC is the presence of a lump or bump on the skin that is red or violet in color. These tumors can be firm and dome-shaped or raised. They are usually painless, but they can grow fast and turn into ulcers or sores.

10 Tips for Patients with a New Cancer Diagnosis

&nbsp; This quick guide will teach you 10 tips to help you or a loved one navigate a cancer journey. Take this 10 minute guide to learn more about how to talk with your health care team abo...

To diagnose MCC, your doctor may perform the following tests and procedures to examine the skin.

After confirming a MCC diagnosis, the doctor needs to know the stage (extent) of the disease to plan the best treatment. Staging is used to find out whether the cancer has spread, and if so, to which areas of the body.

The following tests may be performed to confirm the stage of the cancer.

CT scan: An x-ray machine takes detailed images of areas inside the body. You may be asked to swallow a type of dye, or a dye will be injected into your vein. This helps the tissues and organs show up clearly on the scan. CT scans are usually done on the chest, abdomen, head, and neck.

PET scan: A type of radioactive glucose (sugar) is injected into a vein. Unhealthy cancer cells take in more sugar than healthy cells. This helps show the areas where the cancer has spread.

Lymph node biopsy: A doctor will remove a piece of the lymph node and examine it under a microscope. This may require surgery to get a large enough sample or if the lymph node is in a location that is more difficult to get to. Sometimes the entire lymph node may need to be removed for an accurate diagnosis. There are several types of lymph node biopsies for MCC:

There are 5 different stages of MCC:

Unhealthy Merkel cells are found in the top layer of the skin. These cells can become cancerous and spread to nearby tissue.

Unhealthy Merkel cells form into a tumor that is less than 2 centimeters wide. Stage I MCC is divided into 2 stages:

Cancer clinical trials provide patients with access to new therapies: the next generation of treatment.

Your doctor will recommend treatment options based on the stage of your cancer, your overall health, and your treatment preferences. When the cancer has spread, the location and extent of MCC is also important to consider.

Talk with your doctor about developing a treatment plan that covers managing your cancer in the short-term and long-term. Consider your treatment options carefully. Ask questions if you do not understand something about your treatment or the medical terms your doctor is using. Write down questions before your visits and take notes as your doctor talks so that you can remember what was said. You may want to bring a friend or family member to take notes for you during appointments. It is okay to get a second opinion to discuss your diagnosis or treatment options.

Treatment options for MCC include the following:

One or more of the following surgical procedures may be used to treat MCC:

he cancer and the tissue around it is cut from the skin. A sentinel lymph node biopsy may be done during the excision. If there is cancer in the lymph nodes, a lymph node dissection may take place.

Radiation therapy uses high-energy rays to kill cancer cells or keep them from growing. This treatment is usually painless and lasts only a few minutes.

External radiation therapy is most often used to treat MCC that has recurred, spread to the lymph nodes, or spread to distant parts of the body. It can also be used to treat any cells left behind after surgery or when surgery isn’t an option.

Immunotherapy is a treatment that uses the body’s natural defenses (the immune system) to fight cancer. Substances made by the body or made in a laboratory are used to boost, direct, or restore the immune system.

Immune checkpoint inhibitors are a type of immunotherapy that helps boost the immune system’s response against cancer cells. These drugs block immune system cells that have substances that act as checkpoints to keep them from attacking other healthy cells in the body. Blocking these checkpoints can boost the immune response against cancer cells. This treatment is often used for Merkel cell carcinoma that has spread.

Chemotherapy is a systemic (whole body) treatment. This treatment uses drugs to destroy cancer cells or stop them from growing.

Chemotherapy drugs may be given by mouth or through an IV in the vein depending on the type and stage of the cancer. Chemotherapy is often used to treat MCC that has spread to other organs.

Coping With Side Effects

Before you begin treatment, it is helpful to learn about the side effects so that you know what to expect. When you know more, you can work with your health care team to manage your quality of life during and after treatment.

Common side effects of radiation therapy for MCC include:

Common side effects of immunotherapy for MCC include:

Common side effects of chemotherapy for MCC may include: Caring for Someone with Non-Melanoma Skin Cancer This book is specifically about advanced non-melanoma skin cancers (NMSCs). While certain chapters relate to NMSCs broadly, most of the content focuses on the ins and outs of life with advanced NMSC. This book aims to serve as a resource and begin to answer some of the questions you may have. Skin Cancer Among People of Color

An overview about skin cancer, the risks, and address common myths around this cancer.