The larynx, or voice box, is part of the throat. It is an organ with several roles. It protects the airway to help us swallow, regulates airflow into our lungs, and creates sound for speech. Its vocal cords vibrate with the flow of air to make the sounds that form our voice.

The larynx includes three parts. The upper part, with the epiglottis (which keeps food out of the lungs and helps us swallow), is called the Supraglottis. The middle part, where the vocal cords are found, is called the Glottis. The lower part, just above the trachea (windpipe), is called the Subglottis. Cancer may begin in any part of the larynx, and it can spread to nearby tissue or other parts of the body.

Laryngeal cancer is a head and neck cancer that begins when abnormal (malignant) cells form in the larynx. Most laryngeal cancers begin in squamous cells, which line the inside of the larynx. Cancer rarely develops from the cells of the minor salivary glands in the larynx, but when it does, it is called adenocarcinoma, adenoid cystic carcinoma, or mucoepidermoid carcinoma.

Laryngeal cancer is a rare cancer. It can grow in the larynx, mainly due to smoking tobacco or drinking alcohol. It can spread to nearby lymph nodes in the neck, to the back of the tongue or to other parts of the throat, neck and even lungs.

When squamous cells grow abnormally, they don’t always form cancer. By removing the cause (such as smoking), early abnormal growths could “heal”, and the problem could be reversed. In early stages of laryngeal cancer (such as carcinoma in situ (CIS)), it is more easily treated and cured. In later stages, laryngeal cancer is much harder to treat.

A Frank Conversation about Laryngeal Cancer

This episode takes a close look at the different aspects of treating and living with laryngeal cancer, or cancer of the...

The primary risk factors for laryngeal cancer include:

The most common symptoms of laryngeal cancer are:

Your doctor will do a physical exam and ask you many questions. It is important to describe how you have been feeling and any changes you have noticed, such as pain, difficulty swallowing, mouth or throat sores, or changes in your voice.

Your doctor may order some of these tests:

Endoscopy - A thin, lighted tube is inserted through the nose to look at the back of your nose and throat. This may be done at the doctor’s office, often after using numbing spray.

Biopsy - A sample of tissue is removed to check for cancer.

Fine needle aspiration - This is a type of biopsy done with a small needle to see if you have cancer. It is often used to assess lumps in the neck.

Fiberoptic endoscopic evaluation of swallowing test (FEES) - A thin, lighted tube is inserted through your nose and down your throat so that the health care provider can watch how you swallow from inside.

Biomarker testing/Molecular testing of the tumor - Your doctor may want to test your tumor for P16 or HPV. In certain kinds of head and neck cancer (oropharyngeal squamous cell carcinomas), knowing this test result will help your doctor decide on the treatment that is best for you. The tumor may also be assessed for the Epstein-Barr Virus (EBV). This can cause cancers in the nasopharynx (upper part of the throat behind the nose).

Your doctor may also use the following diagnostic tests:

If you are diagnosed with laryngeal cancer, the doctor needs to know the stage, or extent, of the disease to plan the best treatment. Staging is a careful attempt to find out whether the cancer has spread, and if so, to what parts of the body.

Laryngeal cancer is staged with the AJCC (American Joint Committee on Cancer) system. This is a rating system that assigns a measurement for TNM:

Stage 0 - Abnormal cells are found in the lining of the larynx. It has not spread beyond this are to lymph nodes or other parts of the body. (T0, N0, M0)

Stage II - cancer is in the larynx but may have spread beyond the area where the cancer began (T2, N0, M0):

Stage III - depends on whether cancer has spread from the supraglottis, glottis or subglottis. (T1-T3, N0 or N1, M0)

Stage IV - divided into stage IVA, IVB, and IVC. Each substage is the same for cancer in the supraglottis, glottis or subglottis. (T1-T4a, N0-N2, M0-M1)

Surgery is a common treatment for all stages of laryngeal cancer. The following surgical procedures may be used:

Even if the doctor removes all the cancer that can be seen at the time of the surgery, some patients may be given chemotherapy or radiation therapy after surgery to kill any cancer cells that are left. Treatment given after the surgery, called adjuvant therapy, lowers the risk that the cancer will come back.

If you have a laryngectomy, you will need to learn a new way to speak because your voice box will be removed. Your nose and mouth will be permanently separated from your windpipe and lungs, and you will be breathing through a new opening in your neck called a stoma. Having a laryngectomy changes lung function, including increased mucus and coughing. After a laryngectomy or other surgery in your neck, parts of your neck and throat may feel numb because your nerves have been cut. If lymph nodes in your neck were removed, your shoulder and neck may become weak and stiff. Talking with your doctor about what to expect during your recovery can help you cope with side effects.

More Information on Coping with Side Effects

Undergoing cancer treatment is a challenge for both you and your loved ones. Unwanted side effects can intensify the disruption in your life even further. Fortunately, every year, great strides are made towards conquering cancer and managing treatment side effects.

A healthy diet is an important part of a head and neck cancer patient’s journey before, during, and after treatment. Eating healthy can help prevent weight loss, lack of appetite, and other side effe... 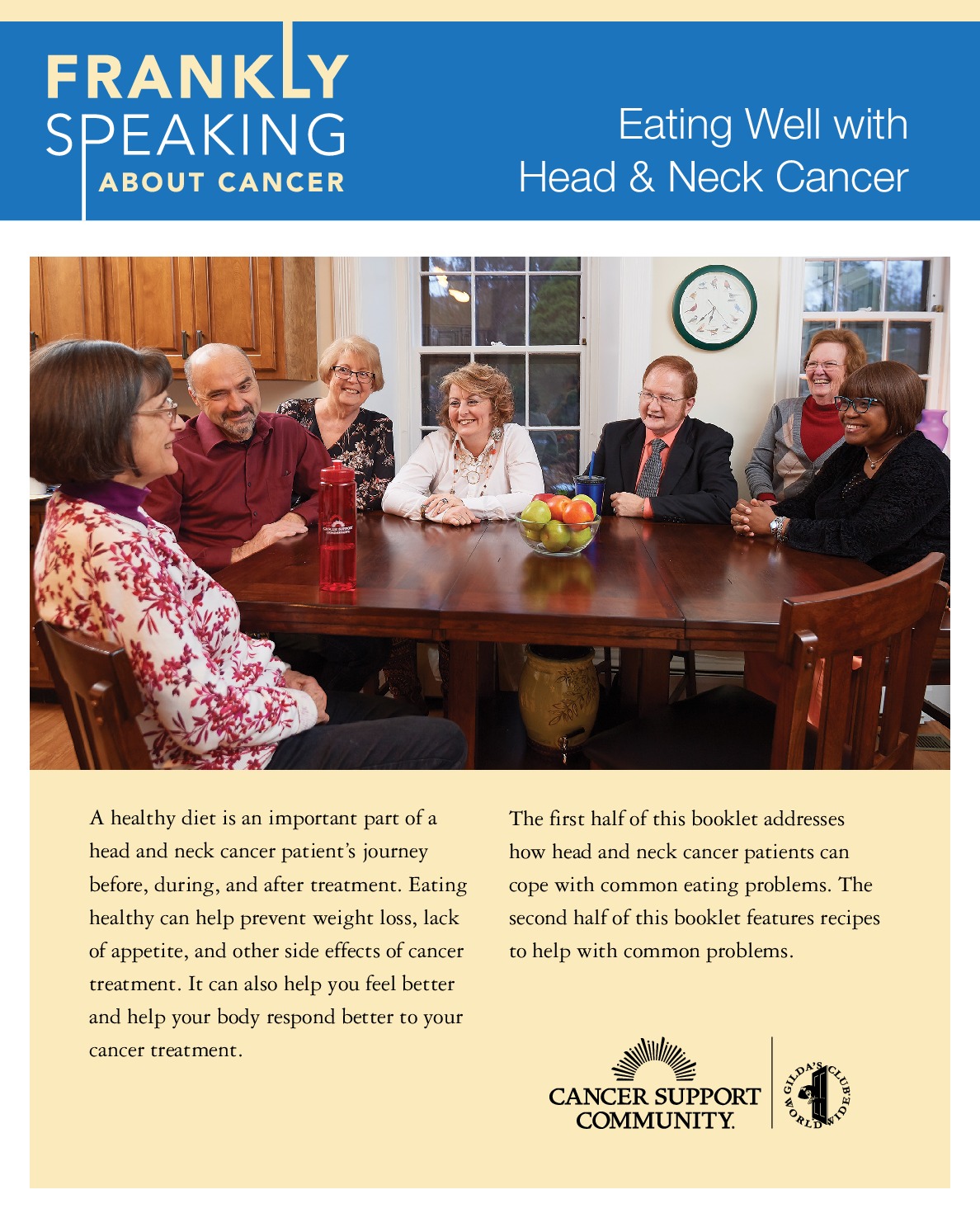 Offers tips and advice for creating and maintaining a healthy diet throughout treatment for head and neck cancers. 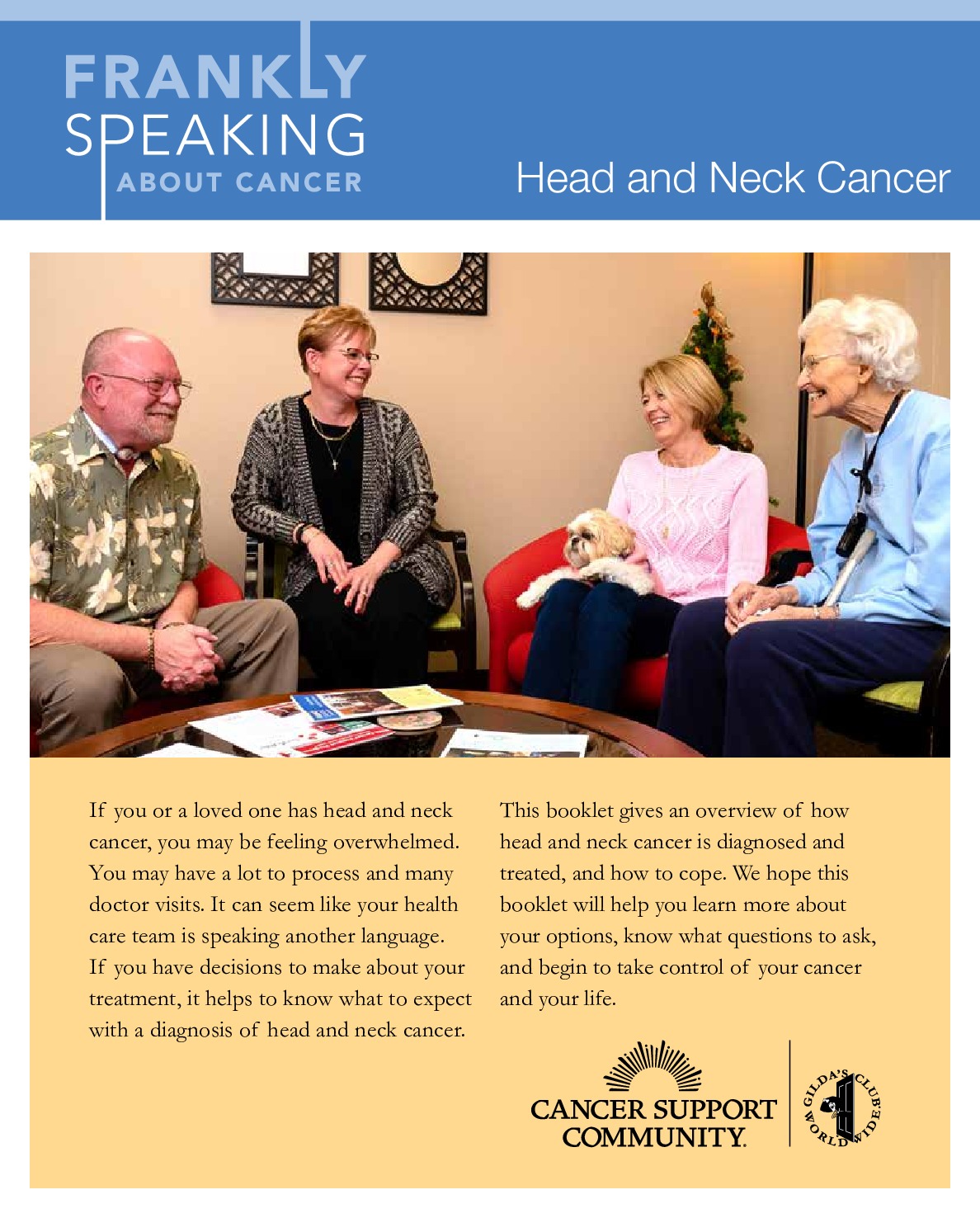 Explains how head and neck cancer is diagnosed and treated, symptoms and side effects, questions for your health care team, tips for coping, and resources for support. 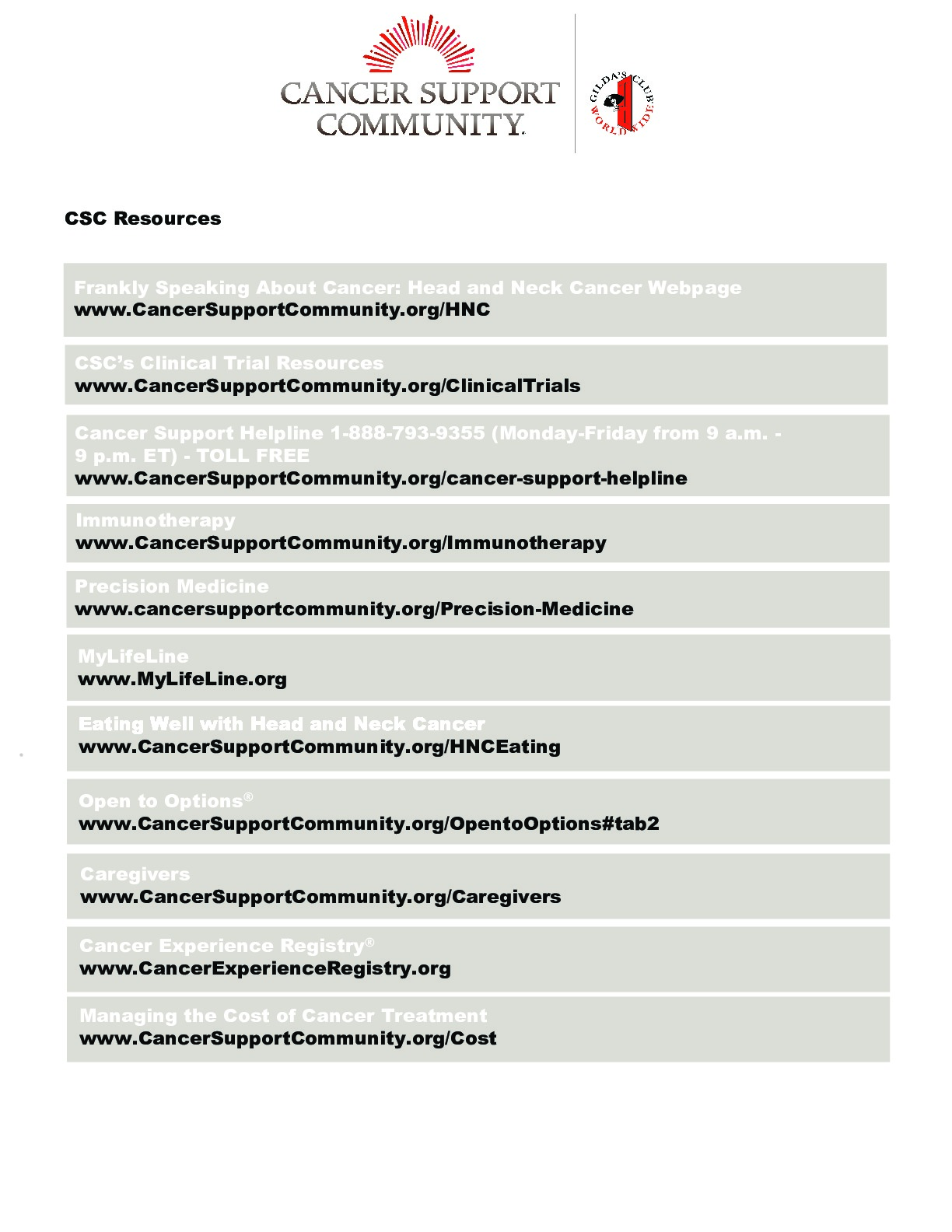 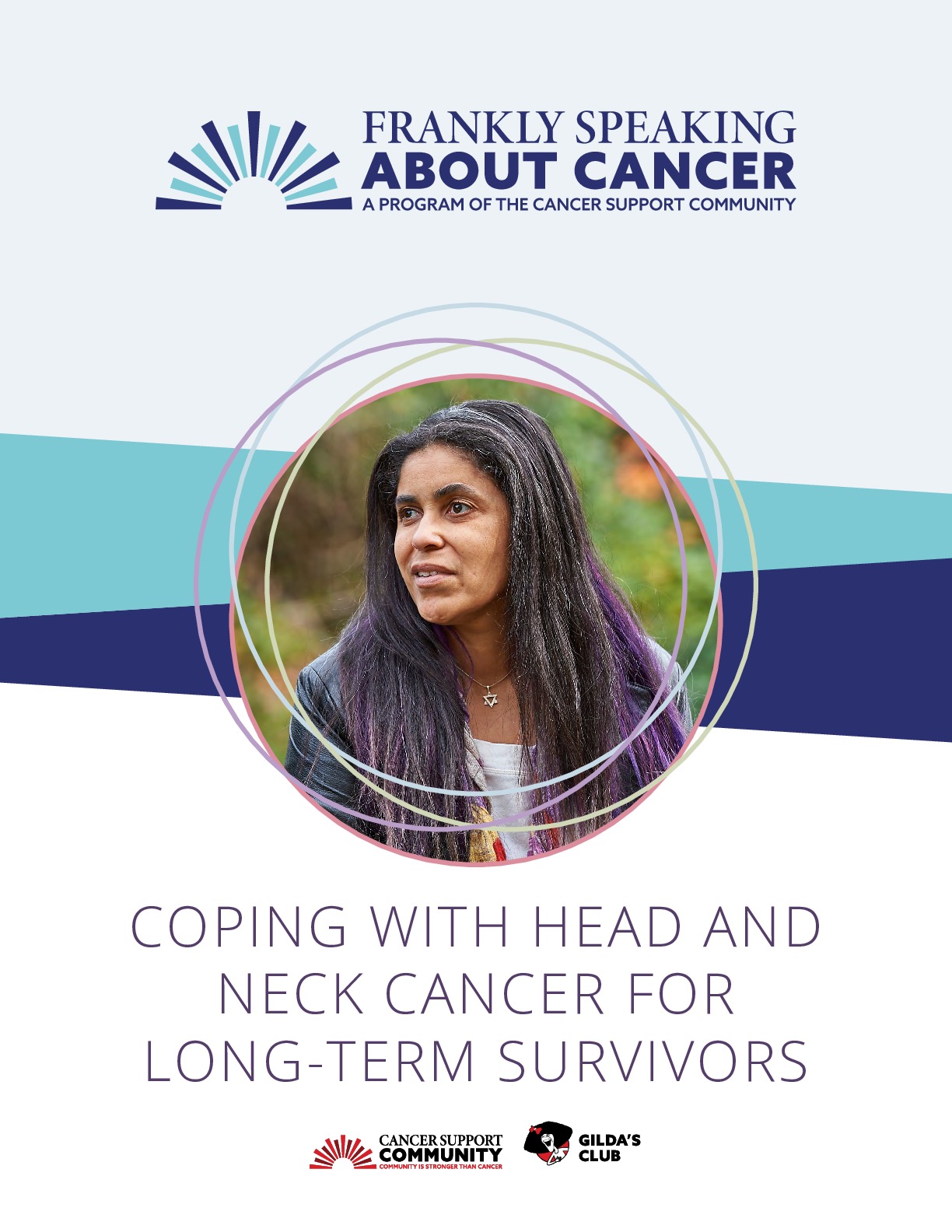 Offers tips for head and neck cancer survivors and their caregivers, including how to manage long-term side effects of cancer and its treatment.